AppleInsider
Posted: June 2, 2018 3:26PM
in macOS edited February 2020
Apple itself has leaked a first look at macOS 10.14 ahead of WWDC, including a redesigned Xcode, an Apple News app, and new Mac App Store video previews. 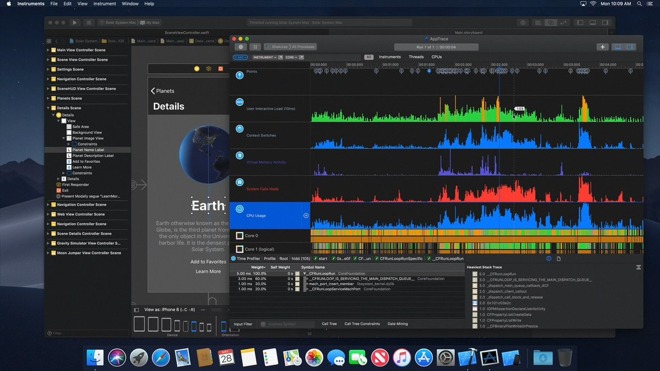 Developer Steve Troughton Smith shared the find on Twitter today which gives us a few clues at some things we can expect from Apple's forthcoming update.

Most obvious is a new dark mode theme to Xcode, possibly hinting at a more universal "dark mode" on the Mac. At the moment, neither iOS or macOS has a "real" dark mode. On the Mac, the menu bar can be changed from a light to dark appearance, and on iOS, an accessibility feature known as Smart Invert is able to somewhat mimic the intent.

The whole UI is dark, with white text and iconography. The toolbar along the bottom also has a new, darker tint, possibly semi-opaque letting the background image show through. There is also a newly designed black trash can icon, though most of the others look unchanged.

Also shown is what appears to be one of the new default system wallpapers, showing sand dunes under a starry night sky. One of the possible names that has been suggested for macOS 10.14 has been Mojave, and this could be a sign that this is where Apple will go following High Sierra.

Also of note, below the newly designed Xcode, we see an icon we haven't seen on the Mac: News. That the News app is making its way to the Mac is no surprise as the platform seems to be doing quite well on iOS. It was always a clear disadvantage for users when an Apple News story was unavailable on a Mac. News stories get shared on Twitter and through messages, but could only be opened on iOS.

As often is the case, the leak came from Apple itself. A short 30-second preview video was uploaded to the Xcode Mac App Store page API. Notably, videos are currently not supported on the Mac App Store, which could be another sign that it will receive a similar redesign to that on iOS as has been rumored. Video previews are currently available on Apple's mobile platform, and the redesign has been credited with a significant increase in App Store revenues.

As expected, the video has been pulled from Apple's public-facing servers.

We will see for certain what else will be coming with macOS 10.14 Monday at 10 a.m. Pacific during Apple's kickoff keynote. AppleInsider has published a guide on what else you can expect to see and will be on scene in San Jose bringing you live coverage of the event.

Update: The video has since been pulled from Apple's servers.