AppleInsider
Posted: October 19, 2018 4:14PM
in General Discussion edited October 2018
Prominent YouTube repair personality and repair shop owner Louis Rossmann has objected to the seizure of original batteries worth $1,000 by U.S. Customs and Border Protection under the suspicion they are counterfeit, ten days after participating in a report attacking Apple's repair policies.

Posted to YouTube on Thursday, Rossmann advises in a video that he received a notice of seizure from the U.S. Customs and Border Protection of "20 Apple Laptop Batteries." According to the notice, the batteries are counterfeit, but Rossmann insists they are imports of "original" batteries.

The batteries were seized in Louisville, Kentucky on September 6, with the notice of seizure sent to Rossmann over a month later on October 15.

The notice claims the batteries "contains markings which are substantially indistinguishable from, and therefore, bear a counterfeit design/word/mark" of one owned by Apple. Under regulations, articles bearing counterfeit marks are to be seized and "forfeited for violation of the Customs laws."

According to the notice, the appraised domestic value of the batteries is $1,068. Rossmann is advised in the letter he could file a petition within 30 days seeking remission of the forfeiture, an offer in compromise that could include a financial settlement, abandoning the goods, or referring it to the courts.

While not directly calling it revenge by Apple for his participation in a CBC report about Apple's repair policies, Rossmann calls it a "crazy coincidence" that the Customs notice arrived a few days after that report's broadcast, especially after importing them without issue for a number of years. 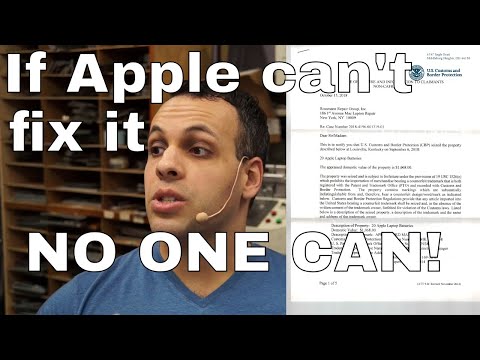 The report highlighted the high cost of repair at the Genius Bar for a fault that Rossmann quickly diagnosed and fixed for a fraction of Apple's estimate, as well as Apple's tendency to make it hard for unauthorized repair shops or users themselves to fix hardware issues.

Rossmann highlights previous instances where the government has sided with Apple with regards to aftermarket parts and third-party repairs, including ICE raids on 25 smartphone repair stores in South Florida for using aftermarket components instead of officially sourced parts to repair Apple devices.

He also highlights an incident in May where iPhone displays were seized by agents from prominent Right to Repair advocate Jessa Jones, bought from a gray market supplier in China.

It is noted that the batteries that were taken were destined for use in Mac models that were "no longer serviced" by the Apple Store, Rossmann claims, due to being declared as "vintage."

"A machine that you cannot have your battery replaced on at an Apple Store because they think it's vintage, they will not allow me to replace a battery on because when I import batteries - that are original - they'll tell me they're counterfeit, and have them stolen from me by Immigration and Customs Enforcement," Rossmann insists.

Rossmann notes that Apple would refuse to provide parts for the "vintage" parts regardless of whether he is an authorized third-party repair center or not. In the case of asking a Chinese producer who makes the "good batteries" that aren't imitations bearing the Apple logo, Rossmann claims they get taken by "a company that's using the power of the government to seize my stuff."

As for the seized goods, Rossmann declares he is willing to fight.

AppleInsider has reached out to Rossmann, Apple, and U.S. Customs and Border Protection for comment on the matter.