AppleInsider
Posted: March 26, 2019 1:01PM
in iPhone edited March 2019
Less than a day after launch, and following a wide rollout of iOS 12.2 and macOS 10.14.4, some Apple News users and Apple News+ subscribers were seeing some crashes at launch on Tuesday morning, which now appears to have been fixed server-side. 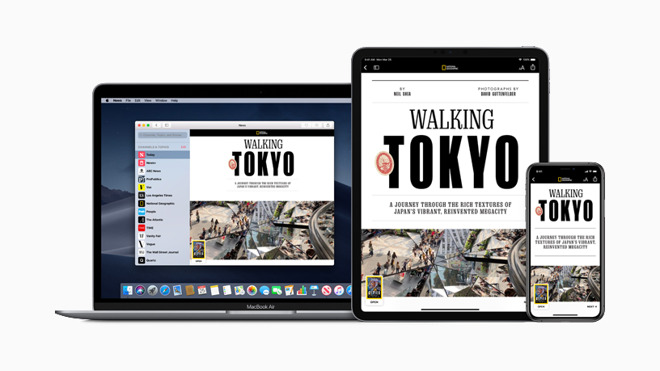 Discussions of crashing within seconds of content display on the Apple News app started circulating on social media early Tuesday morning, with one AppleInsider staffer seeing the problem on one device -- but not all of them. The app launches on either macOS or iOS, may briefly display content, then crashes back to the screen that the app was opened.

The new @Apple News app comes in with a bang and goes out with a Bang on their XS Max. #crash pic.twitter.com/6ZS4zYqMR4

Many users reporting problems on Tuesday morning had previously used social media to comment that the service was working perfectly after launch.

Brief testing on our affected device has demonstrated that a device hard reboot has some impact on the app -- but isn't a guaranteed long-term fix. After one reboot, the app stayed open for about 8 seconds, before crash. Following a second reboot, the app appears to be still functioning.

Update 10:26 a.m. eastern time: Apple has rolled out fixes across the board, and the app on both iOS and macOS appears to be functioning again as intended. No commentary regarding the cause of the issues has been made by the company.

Apple News+, previously rumored to be called "Apple News Magazines", costs $9.99 per month in the US ($12.99 in Canada) and ships with the entire catalog that it has been hosting after the Texture purchase. In a similar way to how it introduces Apple Music, Apple is offering a free trial of Apple News+ for one month.

Notable magazines available at launch include The Atlantic, Better Homes & Gardens, Conde Nast Traveller, Esquire and Vanity Fair. Alongside print magazines and newspapers, the service will also contain online-only titles such as theSkimm, New York Magazine's Vulture, and The Highlight by Vox.

Apple CEO Tim Cook said at the "Its show time" event on Monday that over 5 billion stories have been read on Apple News, making it the number one news app ever created.
«12»