Apple Car could have variable light control to protect privacy of riders, doors that open ...

AppleInsider
Posted: May 14, 2019 12:35PM
in General Discussion edited November 2019
Apple is working out ways its "Project Titan" self-driving vehicle could be improved to give its users more privacy via a band-based lighting system, as well as a door system that can provide far greater access to the inside of the car than how current doors can open. 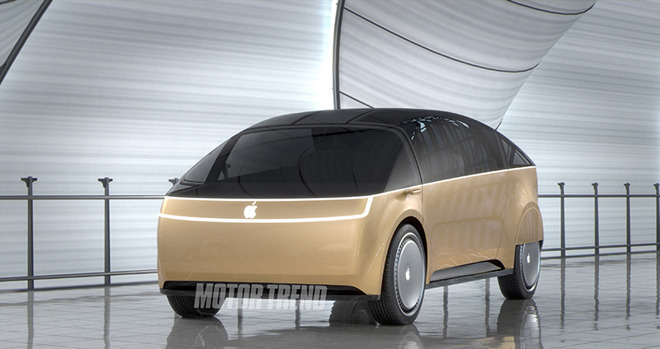 An early render of what an "Apple Car" could look like

Doors are an important element in the design of a car, as they not only are functional in allowing people in and out of a vehicle, but they can also inform the styling. Car doors have evolved from a simple swinging hinge to "gull wing" doors, sliding doors, and even "suicide doors" where the hinge is to the rear instead of the front, with each giving a different distinct aesthetic when opened.

Along with the doors, a less obvious design choice involves glass, as while most people elect to have clear windows, some who prefer to protect their privacy may want to opt for tinted versions. While they do provide some privacy, they do not offer much when the vehicle cabin is illuminated, nor can it be disabled to provide a clearer view to the inside for passers by.

In a pair of patents granted to Apple by the US Patent and Trademark Office on Tuesday, Apple has ideas covering both areas, offering a solution to the tinting dilemma as well as an unusual door configuration.


The first patent, an "Interior lighting system having window with band pass filter coordinated with broad/narrow band light source to provide privacy mode," suggests Apple Cars internal lighting system may be able to control what can or cannot be seen by onlookers.

The glass would be treated with a light filter that is able to allow light to pass through without issue, when used with broad visible bands of light. The filter would however prevent specific narrow bands of light from passing through, so if only some blockable bands were used by the lighting system, it would seem as though no light would pass through to onlookers. 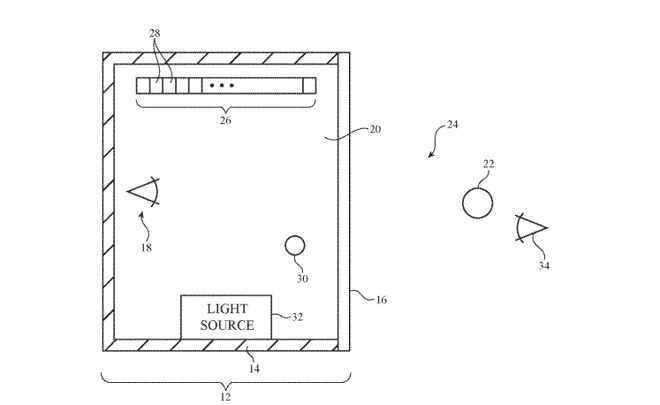 An example 'room' giving an idea of how a narrow band light source could illuminate the area privately just for passengers.

Apple's internal lighting system, made up of LEDs of different colors in order to control the light that is emitted, would be able to switch between two different light modes, covering the entire visible light spectrum and narrow bands. Switching between the two, users could select either to light the vehicle and allow everyone to see under the broad band mode, or to have light within the cabin but without passing through the windows in a private narrow band mode.

This would effectively give users the choice of tinting or non-tinting, without the downside of tinting failing to protect against internal illumination defeating the whole point of privacy.

Apple also suggests the use of a liquid crystal layer as a form of adjustable light filter. It explored the concept in another recent patent filing, one that would allow a light source in the TrueDepth camera array to switch between dot projecting and flood illumination modes.

The second patent, "Passenger vehicle door and window" explains how the front and rear passenger doors of an Apple Car could open up.

Apple here is going for a somewhat modified "suicide" door appearance, with the front and rear having mechanisms at either end of the vehicle instead of at the front of both doors. The modified element is that instead of swinging open, both the front and back doors slide out of the way.

The mechanism, which can work without the central door pillar, means that the car could open up both doors to give an extremely wide and unencumbered entranceway into and out of the vehicle to passengers. If it were a self-driving vehicle, where seating positions could be freed up, this could give even more space to get into seats, with a clear section in the middle. 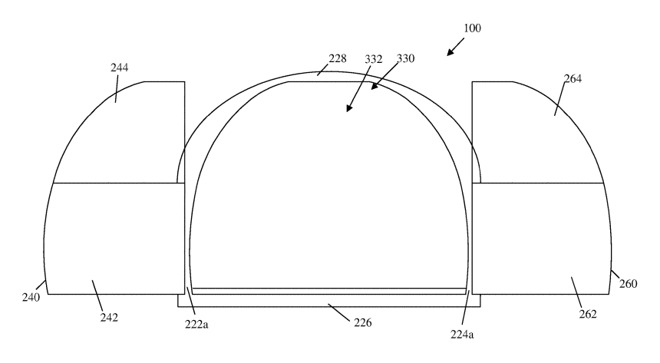 An illustration of how wide the doors could open according to Apple's patent filing.

Rater than just opening the door, the patent also brings up an extra element in the form of raising and lowering window sections. On opening and closing, the windows would lower to get past the top edge of the door's structure, then when closed, would raise back up into a cavity, and forming a seal.

This design would allow for an extremely tight seal to be created, as well as potentially pinning the door closed to eliminate the potential for opening while in transit.

Apple files numerous patents with the USPTO on a weekly basis, but while the existence of patents and filings are not a guarantee that they will appear in a future Apple product or service, they do indicate areas of interest for the company's research and development efforts.

"Project Titan" is the name used to cover Apple's self-driving and automotive efforts, including computer vision, sensors of various kinds, locomotion, and vehicular design. Initially thought to be about the design of an Apple-branded car, it was then pivoted to focus more on the self-driving system, which is currently being tested in California, but some elements of car design still surface from time to time.

As part of these design elements, Apple has attempted to rethink how sunroof systems work, including a fully customizable version and one that slides along tracks that are neither straight nor parallel.

It has also investigated the possibility of using smart seatbelts, point of interest capture systems, inter-car communications, and fiber optic systems, along with augmented reality navigation.
«12»