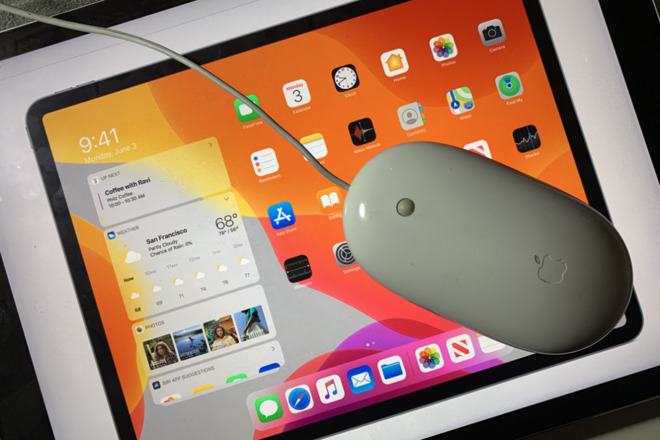 Developers using the first beta of iPadOS have found that you can control the software using a mouse plugged into your iPad. The feature was not announced by Apple, and it is a part of the accessibility options rather than a default. The same option, though, will also allow you to wirelessly connect an Apple Magic Trackpad.

Writing on Twitter, developer Steve Troughton-Smith shows an iPad screen being controlled a mouse cursor. He clicks controls within apps and also manipulates the home screen with it.

Hello mouse support on iOS 13! It's an AssistiveTouch feature, and works with USB mice. @viticci nailed this pic.twitter.com/nj6xGAKSg0

The feature is similar to the long-standing iOS one that let you replace the old physical Home button with an on-screen icon. It was intended for people who had any difficulty pressing the Home button, but also tended to be used by people whose buttons were failing or broken.

In use, the mouse cursor doesn't resemble a regular Mac one so much as a virtual finger, such as you might see in screencast recordings.

Troughton-Smith also confirmed that the same feature is available when you use an Apple Magic Trackpad paired to your iPad running iPadOS.