AppleInsider
Posted: August 27, 2019 2:30PM
in Future Apple Hardware
Future keyboards could use light to determine how far a key is pressed, a design that could replace the switches in a traditional mechanical keyboard with a system that takes up less space and potentially being capable of more presses than existing versions. 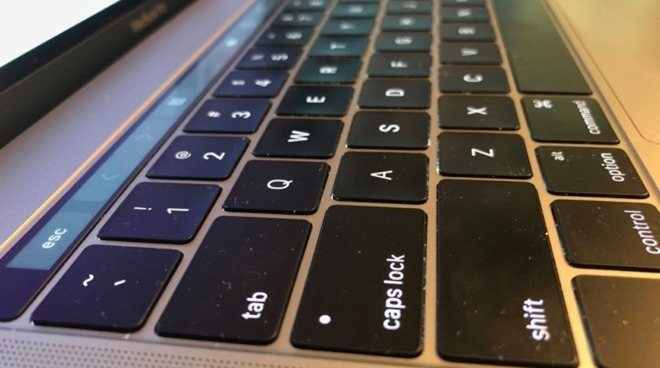 The concept of the keyboard has been around for quite some time, and is a well-used peripheral for computing devices around the world. While there have been some refinements to the item, such as by moving from the mechanical keyboard switch to notebook-style chiclet keyboards, the fundamental concepts of how the keyboard works hasn't really changed.

In practically all physical keyboards, the core idea is that some sort of actuation is performed with a key press, be it within a keyboard switch or a thin membrane-style keyboard. Contacts are connected, sending a specific signal to the host device.

However, Apple suggests physically making a connection within the switch isn't necessary for a keyboard, and proposes the use of light instead. In the patent published by the US Patent and Trademark Office on Tuesday titled "Optical Keyboard," Apple suggests just that.

Instead of an electrical connection being made by the physical motion of the keyboard, Apple proposes a system of light emitters and sensors, as well as elements on the underside of the key that can interfere with the passage of light. By pressing the key, the under-key element changes the passage of light, which can be measured and used to determine an input from a particular key.

As well as using opaque elements, the key can be made of a partially transparent material which emits its own light. Again, light sensors could be configured to detect changes in light levels depending on the motion of the key, again registering specific inputs depending on the key that moves.

The key could include a leg structure that buckles, giving users the feel of the actuation of a normal keyboard, as well as giving different levels of tactile feedback based on how much they press down on the keys. A dome could also be used to support the keycap, while the light could be fed into a light pipe that runs underneath it, accomplishing a similar feat while potentially making the key cap replaceable.

For each press, the light sensor detects the changes from a maximum amount of light emitted at the uncompressed position of the keycap to an amount of light associated with the fully-compressed position. It is plausible that a point between the two can be set as the "actuation" point to register the key press, one that could potentially be customized to require lighter or firmer presses, and therefore more key travel.

Under-key domes could have light pipes and translucent elements to emit light.

As light is being fed into the key or into a light pipe, this plausibly could be used as part of a backlight system for a keyboard, eliminating the need for a separate illumination system for that purpose.

Apple files numerous patent applications with the USPTO on a weekly basis, but while the filings indicate areas of interest for the company's research and development efforts, it isn't a guarantee that the ideas will make their way into a future product or service.

The replacement of the keyboard mechanism has been explored before by Apple, such as in the 2016 patent application for "Depressible keys with decoupled electrical and mechanical functionality." In that patent, Apple proposes the use of light emitters and detectors to measure light reflected from the back of the key, enabling it to determine how far it travelled in a press.

At the same time, the patent application proposed decoupling the mechanical and tactile functionality from the press-detection element, using structures capable of elastic deformation, and with the option for users to adjust the feel of key movement on the fly.

Apple has also explored other keyboard concepts, including the use of glass panel keyboards with force detection for each key, touch sensitive keys, and replacing the keyboard section of a MacBook with a touchscreen.
«123»