AppleInsider
Posted: February 28, 2020 4:50PM
in iPhone edited February 2020
Media-induced panic related to the coronavirus outbreak has caused stocks to crash in value, with Apple's share price dropping to levels not seen since early December, back before it was appreciated how well Apple's iPhone 11, wearables, services, and other offerings had performed during holiday sales. That drop affords Apple a rare opportunity to snatch up billions of its shares at a discount nobody could have otherwise imagined possible. 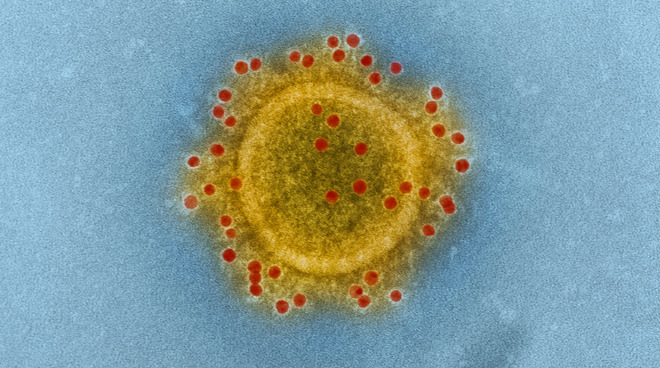 Apple's quick action to buy back billions of its shares at a discount after irrational stock dips have repeatedly occurred over the past decade. In both 2013 and 2014 the company scrambled to buy double-digit billions worth of Apple stock after tech media sources repeatedly depicted its record sales as "disappointing."

That history continued into the most recent holiday quarter, when Apple's chief financial officer Luca Maestri detailed efforts to buy up tens of millions of shares at an average price of $250 before those shares began climbing north of $325 this month.

Now that Apple's share price has dived back down toward those earlier levels, Apple has the unexpected opportunity to continue buying shares near that price--after having established that in normal conditions, Apple shares are worth more than $325. And Apple has made it clear that it expects to return to normal operating conditions soon as factories return to production, and as COVID-19 infections are brought under control, two things the company has already outlined to be happening.

"Apple is trying to keep investors informed on a very fluid situation that is unprecedented," noted Daniel Ives, Managing Director of Equity Research at Wedbush Securities, in a comment to AppleInsider. Ives added that "buybacks could potentially accelerate given this massive sell-off as Apple remains a major buyer of its own stock."

The recent 20% drop of more than $60 per share represents a market cap dive of more than $262 billion. That would rationally suggest that investors suddenly fear a massive, extended earnings shortfall far in excess of what they braced for just a week ago, on "news" of little more than the uncertainty of what would be happening.

Apple initially reported the expectation that its March quarter -- historically the least busy quarter of the year--would deliver between $63 billion to $67 billion in revenues, depending on the scale of interruptions caused by the coronavirus outbreak.

On February 18, Apple revised its guidance without supplying a specific figure, noting only that in light of new findings, it did not expect to reach the $63 billion low-end of its range that it had earlier provided. That means Apple expected that its March quarter revenues would be at least $4 billion worse than the most optimistic high-end of its initial guidance provided just weeks earlier. That's significant, but not representative of a massive, long-term drop in earnings going forward.

Media sources have latched onto the coronavirus outbreak with breathless reporting of deaths, closed factories, supply chain production issues, widespread closures of universities, and other shutdowns. Apple itself hasn't sounded panic over the issues despite having a serious, fiduciary responsibility to honestly report the company's true status as a publicly-traded company.

Cook can't lie about Apple's predicament, and he doesn't need to

Apple's chief executive Tim Cook just expressed his confidence on Thursday that "China is getting the Coronavirus under control," adding, "we have reopened factories, so the factories are working through the conditions to open, they're reopening. They're also in ramp. So I sort of I think of this as the third phase in getting back to normal, and we're in phase three of the ramp mode."

Getting production back on schedule is certainly a complex and difficult task for the company, but Apple operates the world's most expertly proficient operational organization in existence, producing incredible volumes of premium mobile devices at profits that tower far above its rivals. Apple's ability to deal with supply chain crisis events has been tested many times before, and the company is always optimizing its production runs and balancing its supply chain needs across a tangled web of suppliers with incredible competency.

Apple is so good at its global operations that it has been exercising the luxury of going out of its way to, for example, develop new forms of recycled aluminum just to shutter the virgin aluminum smelting plants that were contributing to its global carbon footprint. The company has also spent years focusing on the rights of the workers its suppliers hire, giving it deep insight into the human element of its business that most of its rivals simply delegate away to contract manufacturers.

None of these things are commercially necessary work to build the products Apple makes. The company's rivals aren't even trying to match its efforts. Yet Apple is uniquely profitable in a sea of supposed competitors that are barely turning a profit on their sales of phones, PCs, tablets, and wearables. Apple's ability to attract and retain long-term buyers who then buy other new products and subscribe to the company's services is exactly what drove the price of the company up over the last several months.

Apple's stock price has not been driven upward by euphoria about short term revenue peaks. In fact, over the last decade, Apple frequently reported massive spikes in revenues only to see its share price remain unchanged or even fall on fears that its current success couldn't possibly be expected to continue.

Apple's revenues under temporary threat from coronavirus interruptions similarly shouldn't drive Apple's share price. What has changed is the clearer understanding that Apple's revenues and profitability are not a short-term aberration, but rather the result of building a well-oiled cash machine that has no equal-- and effectively no real competition.

The Media is free to lie

Media sources and analysts have no legal responsibility to tell the truth, and many have frequently flat-out lied about Apple's situation over the past several years. The Wall Street Journal, Bloomberg, Reuters, and Japan's Nikkei have all stridently screamed that generation after generation of new flagship iPhones were imperiled by "disappointing" demand, claimed that "channel checks" had given them clear insight into Apple's troubled production that certainly meant that sales were about to slip away to Android and never return, and rigorously promoted the false idea that buyers simply weren't going to pay $1,000 or more for a phone. They were consistently, unrepentantly wrong in their reporting. 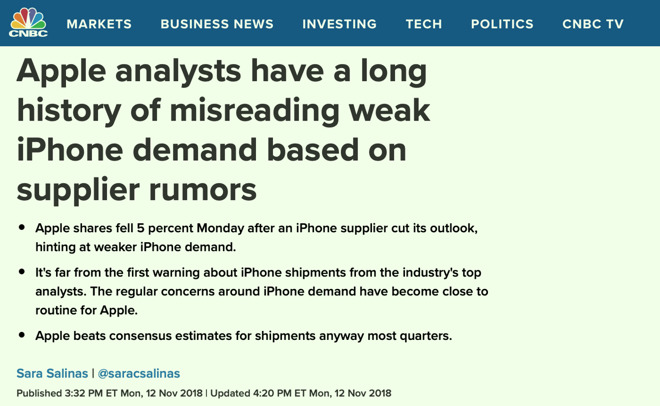 
Media research groups have similarly long insisted that Apple Watch and HomePod were incredible failures, despite both growing into multi-billion dollar businesses selling profitable and sticky products that promote continued sales of other hardware and services, including Apple Music. None of them had to answer for their giddy promotion of Alexa, "voice first," smart bands, or any other rival product that ultimately failed to deliver upon the promise of creating an important, financially significant app development platform or related sales of products, online orders, or other services.

Until just recently, investors had been fed the idea -- for years -- that Apple was experiencing slack demand for its products, particularly in China, and was watching helplessly as it continued to bleed away unit sales volumes while companies such as Huawei kept posting new unit sales increases. But that was not accurate.

Once the market came to realize that Apple's continued success was clearly untethered to the unit sales of Huawei, and that demand for its products could be addressed simply with more aggressive promotions by Apple itself, investors responded by revaluing the company at a significantly higher multiple, driving its share price into record territory.

Apple wasn't driven up into a bubble valuation. Even at its peak, its price to earnings ratio was far smaller than Google, Microsoft, Amazon, or other peers in technology. So the massive drop in Apple hasn't been the result of a rational reevaluation of Apple's value. It's just yet another media-induced panic that allows Apple the opportunity to further concentrate the value of its share via stock buybacks.