Apple doubling down on bendable designs for MacBook, MacBook Pro

AppleInsider
Posted: May 5, 2020 11:17AM
in General Discussion
Future MacBook or MacBook Pro models may adopt a unibody design with a seamless bendable hinge mechanism to allow Apple to build them out of a single piece of material. 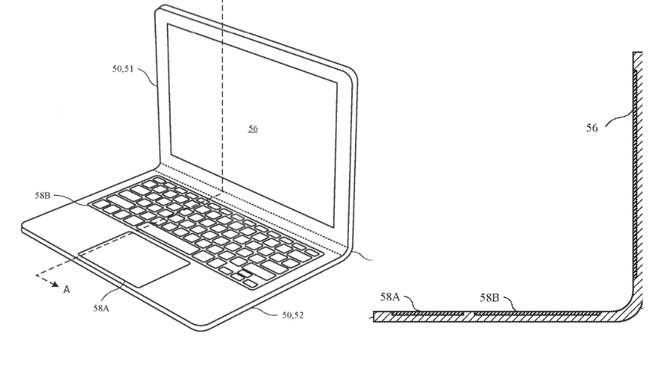 It could open up like a regular MacBook Pro, but this potential future design would include a bendable hinge

Following many Apple patent applications for bendable, and even rollable, screens for the iPhone and iPad, the company is also examining how a MacBook Pro could benefit from being able to bend. Rather than the current complex hinge mechanism connecting the screen to the body of the computer, Apple is investigating a more flexible device.

"Planar hinge assembly," US Patent No 10,642,318, chiefly describes how such a design could apply to a MacBook Pro-style device.

"A personal computing device comprises a single piece body having a seamless overall appearance and that includes a bendable portion that is capable of having a smoothly curved shape," it says.

Apple is careful to always describe "a personal computing device," and its details can also apply to "a smart phone cover or a tablet computer device." But it all hinges, so to speak, on what's referred to as "a multi-state bending assembly."

The idea is that the MacBook Pro, or other device, can be made in a single plane, and that this "single piece body" has a "bendable portion." The bendable part still has to house the same electronics that currently connect a screen to a keyboard, it has to remain "in mechanical communication."

Apple's solution is to have the "adjustable bending structure" be formed from "a stack of layers that can transition from an uncompressed state to a compressed state."

Most of the detail goes into how these layers can be compressed or uncompressed, plus how each is "capable of bending in unison in response to a force applied." There's actually surprisingly little about the specific advantages of having a bend instead of a regular hinge.

There is the issue that a current MacBook Pro hinge is a complex design, but it is by now extremely well tested. A bendable hinge could be simpler, though, and so could be more reliable.

However, there is also an issue of what else could bend alongside this hinge. "For example, the flexible consumer product can include [a] flexible display that overlays and is supported by [the] adjustable bending structure," says the patent.

This is similar to a previous Apple plan for a device which rather than a regular screen and keyboard, instead presents two screens -- with one able to display an input device. That design included a regular hinge, but this bendable one also refers to how one portion "can be used to present visual content whereas a second portion can be used to emulate an input device."

Where such a display could overlay a bendable hinge, Apple also suggests that such "an adjustable bending structure can also include a flexible battery." This, too, is similar to a previous design, this time for a foldable iPhone or iPad battery.

The patent is credited to Alex J. Lehmann, and Paul X. Wang. Both have previously been listed as inventors on patents including "Computer Systems With Finger Devices," and "Touch-based input device with haptic feedback." Wang is also credited on a related "Housing Structures and Input-Output Devices For Electronic Devices."