AppleInsider
Posted: May 8, 2020 8:02PM
in General Discussion edited May 2020
Apple's upcoming reopening of some U.S.-based retail locations will be based around guidelines that the company developed for and refined at its open South Korea Apple Store. 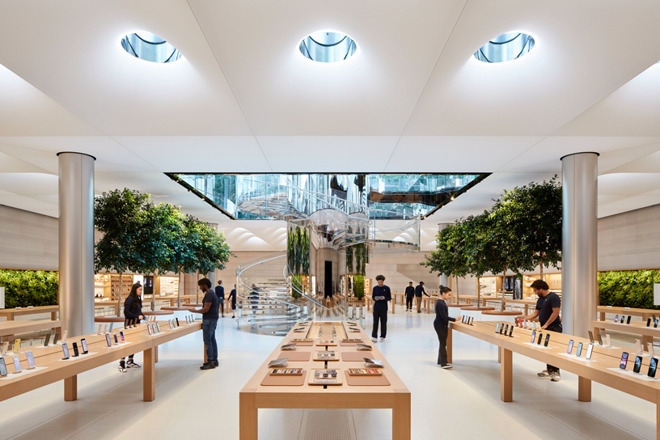 Apple Stores like this one, pre-coronavirus will look quite different when they reopen, with tweaked product displays and new social distancing guidelines.

The Cupertino tech giant on Friday announced that they would cautiously kick its retail reopening process with select U.S. stores in Idaho, South Carolina, Alabama and Alaska the week of May 11. In mid-April, Apple reopened its sole brick-and-mortar location in South Korea.

Using that location as a testing ground, the company has reportedly developed an instructional video with coronavirus and social distancing guideline that it's now sending to other retail employees. That video, obtained by MacRumors, outlines a set of strict practices that Apple Store staffers will be required to follow to ensure reopening is done safely.

Precautions include temperature checking both employees and customers, holding socially distanced daily briefings for staffers, and providing and encouraging the use of hand sanitizer by customers. Apple Stores will also be instructed to limit the number of people allowed inside of them, forming lines with shoppers at least two meters apart.

Guidelines also extend to how products are displayed, with fewer products per table positioned in a way to keep customers from standing too closely to each other.

Apple Store staffers themselves will also take precautions, including limiting movement by communicating through the Talk app, working at alternating workstations, and wearing face masks at all times.

Employees will also use a "relay system" to get products and repaired devices from a stockroom to customers without too much employee movement. The backrooms at Apple locations will also see most of their communal areas rearranged to encourage social distancing.

Stores that reopen will operate with reduced hours at first, though it isn't clear what the new schedule will be.

Apple Stores have been shuttered across the globe -- except for those in China -- since March 14. In an internal memo from March, Apple's chief of retail and people Deirdre O'Brien said that the company would evaluate whether to reopen offices and stores on a city-by-city basis, evaluating local guidelines before proceeding.