AppleInsider
Posted: November 11, 2020 4:29PM
in General Discussion edited November 2020
The Macs with the new Apple Silicon M1 chip each have new port configurations and more processing power than ever, but monitor configurations have changed. Here's what monitors you can connect to the new Macs, and how they compare to the Intel Macs that they replaced. 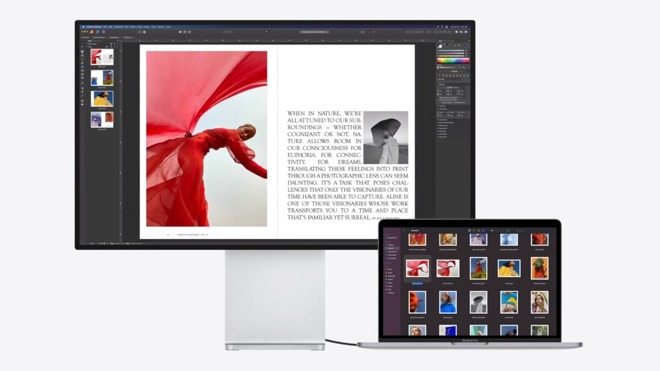 These are the monitors and configurations Apple says works with the new machines.

The Mac mini with an M1 processor can run a single external display using the DisplayPort 1.4 rating in the Thunderbolt 3 spec. This means you can have a single 6K monitor like the Pro Display XDR or a single 4K monitor attached at any time through the USB-C ports.

The M1 Mac mini can run a second monitor via the HDMI 2.0 port which supports up to 4K connections.

The MacBook Air with an M1 processor can connect only a single external display at a time, in parallel with the internal display. It supports up to 6K at 60Hz so monitors like the Pro Display XDR will work fine.

The 2020 MacBook Air with Intel could connect up to two 4K displays, one 5K display, or one 6K display using the Thunderbolt 3 ports, beyond the internal display.

The 13-inch MacBook Pro with an M1 processor can connect only a single external display at a time in conjunction with the laptop's screen. It supports up to 6K at 60Hz just like the MacBook Air.

Apple's M1 is the reason for the number of external display limitations, since macOS can run multiple external displays on Intel variants. So, essentially each Mac with Apple Silicon can only run one external monitor via a Thunderbolt 3 port, and the Mac mini is the exception due to having an additional HDMI port.