AppleInsider
Posted: November 6, 2008 9:18AM
in iPhone edited September 2019
A series of screenshots from Apple's latest iPhone 2.2 beta have leaked on the web, revealing a new interface for downloading podcasts over wireless networks and a more polished version of the handset's App Store application.

The screenshots, published by the German-langue blog Flo's Weblog, appear to confirm reports that the next software update for the iPhone will allow users to grab podcasts from the mobile iTunes Store over the handset's 3G connection.

A report published late last month had suggested this would be the case, but the feature was said to be non-functional at the time. The series of screenshots, republished below, reveals the interface flow for direct podcast downloads.

According to the report, Apple will initially limit direct downloads to podcasts 10MB in size or less. It's unclear, however, whether the feature will be restricted to iPhones on a 3G connection or if downloads can also be performed over an EDGE network.

In addition, the same report tosses in a screen captures that reveals upcoming interface change to the App Store application that's expected to ship as part of iPhone Software 2.2.

The change, first detailed by AppleInsider back in September, is rather uneventful, consisting of a new categories home page that will feature large category icons and more generous spacing between each listing, rather than just narrow textual category representations.

Unlike builds of the software available in September, the latest betas reveal the new icons Apple may have chosen to use for its category listing (though they appear to be icons for third-party Apps at present). Previously, blank placeholders would display. 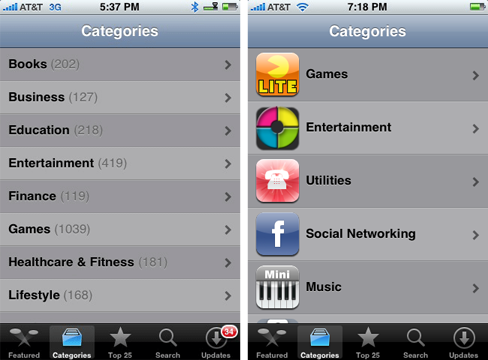 Readers looking to keep up on changes due as part of iPhone Software 2.2 can do so by reviewing AppleInsider's iPhone Software 2.2 topics page (RSS also available), which groups together all previous reports on the subject. A general list of feature additions are as follows: