Trump's off-the-cuff statement came during a campaign rally in South Carolina on Friday, where the outspoken businessman magnate urged constituents to stop using Apple products until the company gave in to law enforcement demands.

"First of all Apple should give the security for that phone, okay?" Trump said. "What I think you oughta do is boycott Apple until such time as they give that security number. How do you like...I just thought of that."

The crowd responded with a rousing cheer as Trump dropped more fact bombs, clarifying that the iPhone in question is in fact owned by the San Bernardino County Department of Public Health, not the "young thug" that "killed all these people." He was referring to Syed Rizwan Farook who, with the help of his wife Tashfeen Malik, killed 14 coworkers in a surprise attack last December.

FBI agents recovered Farook's iPhone 5c from a related crime scene but has so far been unsuccessful in circumventing the device's passcode lock. Earlier this week a federal judge ordered Apple to comply with FBI requests to assist in bypassing the phone's security barrier, which would require the company to create a software workaround that effectively breaks its own encryption protocol.

Seemingly caught up in his own rhetoric, Trump forgot he himself frequently uses an iPhone to post both personal and professional tweets. But he was on a roll.

"Not even his phone, we don't even have to go that far," Trump said. "But Tim Cook is looking to do a big number, probably to show how liberal he is. But Apple should give up -- they should get the security -- you'll find other people."

Trump most recently tweeted from his iPhone less than an hour prior to this article's publication. Following today's remarks, Trump in a tweet sent from Twitter's Web client admitted to using Apple's products, but claimed to also use Samsung devices, which he would switch to exclusively until Apple complies with FBI demands.

Trump later committed his boycott Apple message to the digital record in yet another tweet. But this time he used an Android device. 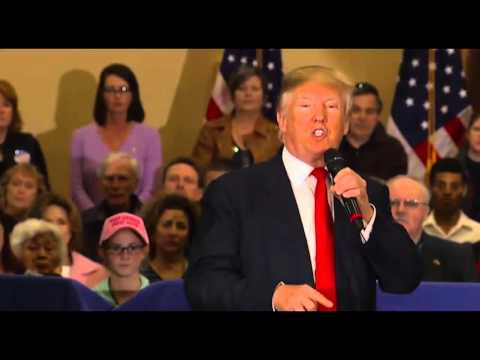