Review: 'Mario Kart Tour' on the iPhone and iPad falls short on nearly every front

AppleInsider
Posted: September 29, 2019 6:36PM
in General Discussion edited September 2019
Mario Kart Tour has raced onto the App Store, and it is an example of what not to do when converting a beloved franchise to mobile. 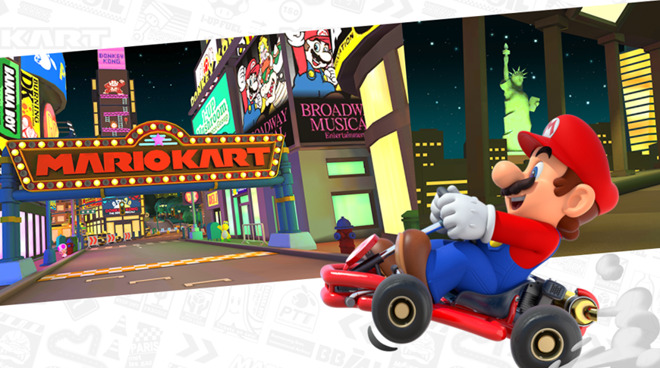 Nintendo has released another mobile Mario game. Mario Kart Tour becomes the third title to make it to the iPhone, alongside Dr. Mario World and Super Mario Run.

As a fan of Mario Kart, I wanted to know if Nintendo could make a mobile version that stayed true to form.

Visually, Mario Kart Tour is fine. It's got the bright colors and slick-smooth textures we've come to expect from modern Mario games. The sounds are all extremely Mario Karty. The music is, as far as I can tell, mostly just slightly tweeked versions of songs from previous games.

Overall, it looks and sounds exactly like a Mario Kart should. 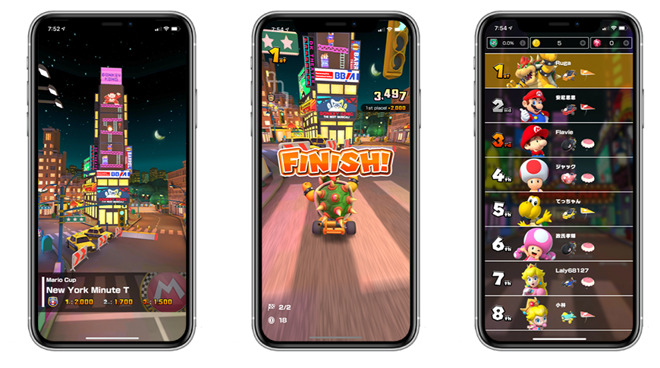 If I were to ask you what makes a person a decent player at Mario Kart, you might give me a couple of different answers. Maybe you'd say understanding dashing and drifting or knowing when to use items. While these are good answers, I'd posit it is something else.

The ability to steer.

Specifically, the ability to steer well, in the case of a good player. I've played a considerable amount of various Mario Karts in my time, and all of them have come down to fine motor control. Can you hug the curves of a track? Can you squeeze between two obstacles? Can you navigate to that hidden shortcut? It all boils back to being able to steer without under- or over-steering.

Mario Kart Tour, however, removes a lot of that. First, your kart auto accelerates, which means you're automatically guided through turns and obstacles at the speed the game assumes you should go.

Next, the steering is an imprecise swiping motion. If you're like me, you exclusively play Mario Kart with a controller that has a plethora of buttons and at least one joystick. Swiping does not feel correct, and I'm not sure if there's a solution to this problem.

I suppose I'd argue that the solution would be to not bring Mario Kart to mobile phones in the fist place, but even an on-screen joystick would be better than the current setup.

My other argument is a big part of Mario Kart is being able to see what you're doing, which makes the developers choice to run the game in portrait especially strange. I'm not sure why they didn't just make the game run in landscape mode.

It also feels too easy

Now, I'm pretty decent at video games, but out of the couple dozen games of Mario Kart Tour that I have played, I have won nearly 100% of them. I primarily race on 50cc and 100cc, which definitely aren't the hardest modes, but my win ratio still seems impossibly high.

In fact, I was pretty sure something was up, so I started up a 100cc race and took my finger off the screen. I wanted to see if it was possible for my character to complete a race by themselves. After all, the game features auto acceleration, so it'd be likely that my character could wrangle in a solid 8th place without my input.

Well, I was wrong. My character didn't come in dead last. They came in fourth place. Not only that, but any time I'd hit a wall or go off a jump, the game was quick to re-center my character into the middle of the track. I never steered, I never used an item, and I never jumped. I never touched the screen, and my character still came in fourth.

Robert Bowling had a similar experience, except his character came in first. First place with no physical input. And he was playing on a 200cc level, which is regarded as the hardest mode.

Just tried to lose a race in Mario Kart Tour and it literally forced me to win.

I turned off smart steering, didn't steer manually and just let it drag me across the wall or across the road on curves.

I didn't do a rocket start and fired off items instantly. Still 1st place. pic.twitter.com/cwYr4g4odK

At this point, you could almost argue that Mario Kart Tour isn't a game. I'm not entirely sure what it is, but as soon as you remove win/loss conditions from a game, I think it ceases to be a game. Maybe, just maybe, it becomes more difficult at higher levels, but as of right now, it definitely feels like it's heavily weighted in the players favor.


Again with the extensive in-app purchases 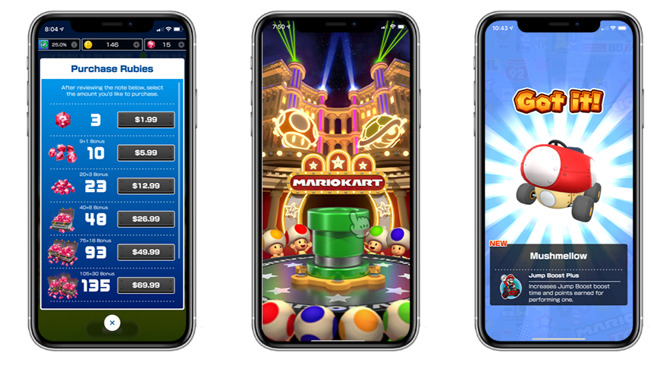 I don't know who is heading up mobile development at Nintendo, or at the very least, who is giving them the go-ahead on their mobile game pricing. Whoever it is, though, needs to cool their jets on the in-app purchases.

Mario Kart Tour genuinely features some of the worst IAP in a Nintendo game we've seen to date. By any measure, Mario Kart Tour is a gacha game. Gachas are named after Japanese toy machines that feature blind-packed toys that come in a set. The highly controversial practice of lootboxes works on the same premise.

Gachas are highly predatory by nature. They require you to spend money at the chance of getting something you want. In Mario Kart Tour, you spend rubies for the chance to get new drivers or car parts.

Can you get rubies without paying? Yes. Like most gachas, the premium currency is not exclusively for people who spend money on it. However, like most gachas, these are doled out slowly and somewhat rarely. You can get them as a daily log-in bonus or as a reward for doing well in certain races, but they are fairly few and far between.

So we've established that the game is going to try to beat money out of you. What we haven't talked about is the gacha-draws themselves. Gachas often feature a tier system that is based off of rarity. Especially useful items or popular characters are more rare, so the chances of you drawing them is significantly smaller. Additionally, you do have the ability to get duplicates. Like Pokemon Masters, getting a duplicate will raise the level of an item and make it better.

This means that not only are you more likely to get items and characters that you don't particularly want, but the odds of you being able to level up something useful go down. You'll probably pull a Koopa Troopa multiple times before you'll ever pull Metal Mario, let alone pull Metal Mario enough times to level him up.

Also, as previously discussed, it's already hard enough to lose the game, so what's the point of pumping money into it?

I've always wondered why games don't give players the ability to outright purchase characters, skins, and items directly, rather than forcing them to buy a random chance to pull something. I'm one of the many people out there who has no problems spending money on apps and games. I'd gladly buy my favorite characters and fun or useful items in just about any game out there. What I don't spend money on is random chance.

Admittedly, there's an option to buy characters and items in in Mario Kart Tour. Sort of. You can only buy the characters and items that show up in the Daily Selects section of the store, and you can only purchase them with coins you have collected. Coins appear on regular tracks, but appear in greater quantities in tracks that you pay rubies to race on. You'll need to spend approximately six rubies to gain enough coins to buy a common rarity character out of the Daily Selects section, or about what you'd pay if you were to just draw a random chance. Again, it all comes back to that premium currency.

And lets not forget the fact that Nintendo has already shut down an underperforming gatcha app-- Miitomo. Players who had spent money on Nintendo's first mobile app, Miitomo, were devistated to hear that it was closing and all the items that they had purchased would be inaccessible upon shutdown. Miitomo didn't have the same amount of interest that an entry into Mario Kart would, but it wouldn't be surprising if Nintendo chose to close down Mario Kart Tour if interest waned.

I'll pass on the Gold Pass 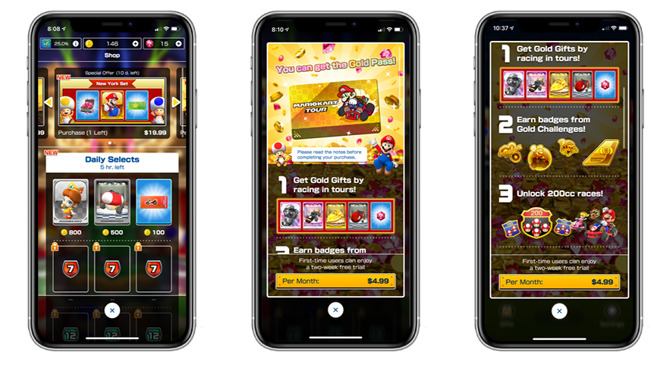 Mario Kart Tour also offers something called the Gold Pass, which gives you the ability to earn increased rewards and race at higher speeds. You can also earn badges from gold challenges. You can get a free two week trial of the Gold Pass, but afterward it costs $4.99 a month.

The Gold Pass feels highly exploitative. You're not getting a guaranteed benefit, and it doesn't really prevent you from needing to occasionally purchase rubies if you want to regularly draw new items.

I'm not impressed. Usually I can find something positive to write about, but with this particular offering, it's difficult. Nintendo makes it hard to love their mobile offerings, which is strange because their console games are always pretty good, if not great.

I would pass on this title if you haven't already made a leap to downloading it, and I wouldn't suggest putting any money into it if you do.