Apple Environmental Report demystified - what it all means to the consumer

AppleInsider
Posted: October 9, 2019 12:43PM
in General Discussion edited October 2019
The production of consumer electronics is damaging to the environment, and there's no real way around that. Apple has been striving to help offset the damage they're doing by adopting more environmentally sound practices, but how much does it help? 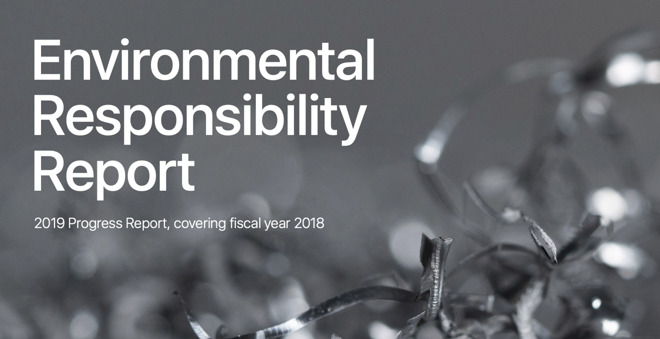 Apple released its last Environmental Responsibility Report in April of 2019, offering a glimpse into how the company is making strives to become environmentally friendly. The report shows some impressive figures, giving many Apple fans and environmental advocates hope for a brighter, more ecologically sound future.

But, there's a lot more behind the numbers and figures that Apple presents.

The inherent problems with mobile technology

Smartphones are endemic of a much larger problem. Apple is not even close to fully responsible for the damage that consumer electronics have done to the environment.

Apple consistently ranks highly among companies who are trying to mitigate the environmental damage that comes with manufacturing consumer electronics. In 2017, Greenpeace gave Apple a green electronics rating of B-, which is significantly higher than Huawei, who received a D, or Samsung, who received a D-.

The problem lies in the quantity of devices that are manufactured. More than 1.5 billion smartphones are expected to be produced every year, and only a portion of them will be an Apple product. For any real environmental damage to be reduced, all electronics producers will need to start adopting less damaging practices.

People are often quick to praise Apple for attempting to mitigate the damage done to the environment that comes with electronics manufacturing and running a trillion-dollar company. While praise is due, it's also worth knowing that there are a plethora of reasons why beating competitors to the environmentally-friendly punch is in Apple's best interests.

Early adopters of "green" practices, be it renewable sourcing of electric or switching to energy-efficient appliances or reducing manufacturing waste, are given financial incentives to do so. It's often far less expensive to be an early adopter of green practices than it is to be a company punished for eschewing them.

On top of that, it just looks better. When you can tell consumers that your product is less environmentally detrimental than your competitors, it makes you look like a smarter choice.

We live in an era where a lot of consumers want to be seen making smarter, more environmentally conscious choices. When Apple makes the choice to publicly disclose what efforts they've made toward reducing harm to the environment, Apple is telling consumers that, by extension, they are also doing less damage.

Whether or not this is a factual statement, however, is an entirely different issue. Prior to publication, we reached out to Apple to see if they had any more information on where they plan on taking their sustainability efforts in the future, but received no reply.

One of the things observant Apple fans may have noticed is that Apple has started phasing out plastic in their packaging. This started in 2018, when the iPhone 7, iPad Pro, and the 2018 iPad were shipped with fiber alternatives to the traditional plastic trays. In 2018 alone, nearly 218 million iPhones were sold, and nearly 218 million plastic trays didn't wind up in landfills.

That's enough plastic to fill the entire Mall of America to a depth of eight trays. 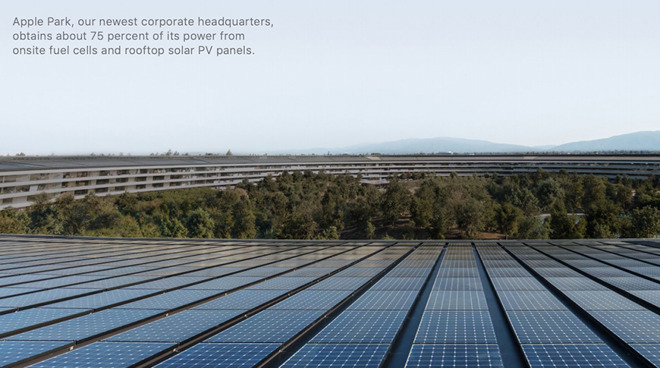 Every electric company is a little different at this point, but they all work more or less the same: You check the box, you pay your electric bill, and part of that electric bill funds research and development projects for your area's renewable energy program.

As a general rule in the United States, household electricity is still primarily coming from fossil fuels -- coal and natural gas. Globally, coal still produces 41% of the world's electric. This isn't likely to change any time soon, as it difficult -- at least in the United States -- to update infrastructure to incorporate things such as solar, wind, or hydroelectric. On top of that, a majority of U.S. citizens still oppose nuclear energy.

Apple, on the other hand, has a lot of money and resources. Apple can purchase land that they can build solar and wind farms on. Apple can install highly efficient solar panels on the roof of its corporate offices to help offset the need for fossil fuels. 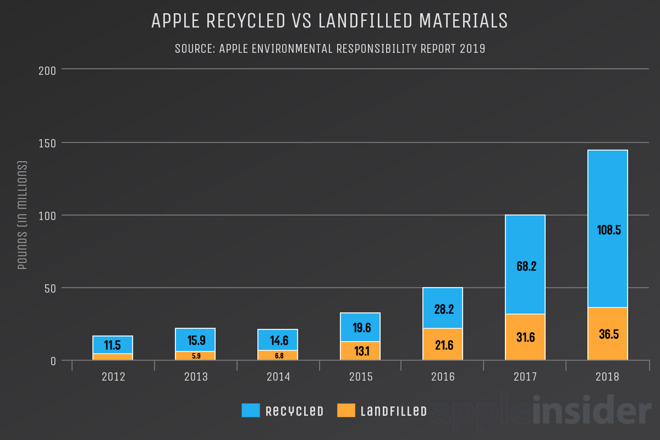 If we look at the data provided by Apple on their recycled versus landfilled materials, it gives the picture that Apple has removed a lot of potential waste from landfills. This is absolutely the correct takeaway from the data, but it also doesn't highlight a bigger problem -- Apple is producing considerably more waste than they have been in past years. 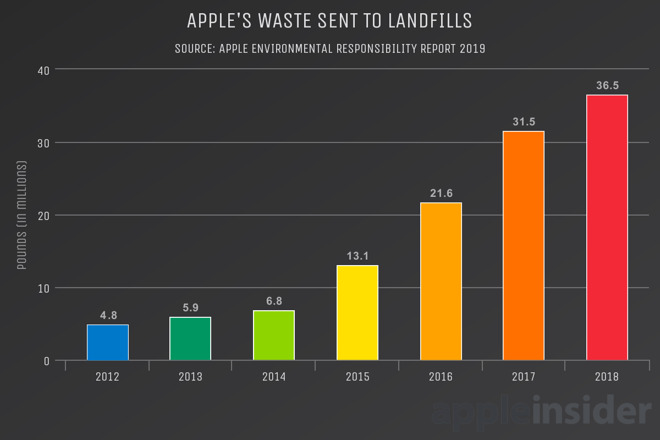 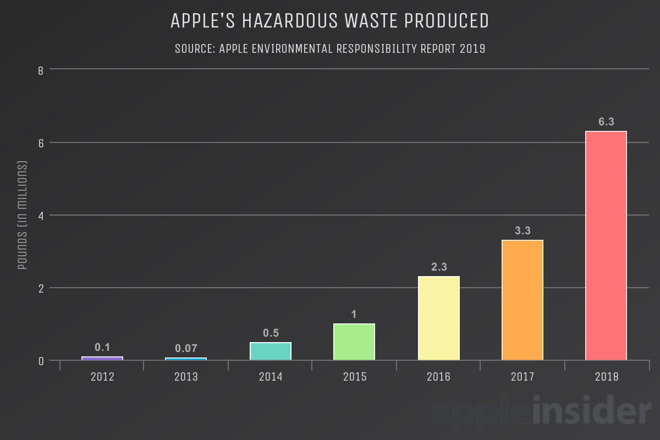 And that's just the waste that they could send to landfills. As the chart above shows, Apple's hazardous waste has nearly doubled from 2017 to 2018.

This primarily has to do with the fact that Apple just produces more devices these days. By producing more devices, they're ultimately going to produce more waste. For example, in 2018, Apple sold over 217 million iPhones, versus 125 million in 2012. Of course, this isn't everything Apple makes, but it is a good proxy.

It should also be noted that Apple had not been including their statistics for distribution center waste in their reports until 2017. This accounts for a large portion of their landfilled waste prior to that date as well.

Yes, Apple should be applauded for reducing the amount of waste that could have been sent to landfills. Ultimately, we should be willing to recognize that they're still producing many more times the waste they were producing seven years ago.

Even accounting for more complete reporting with the inclusion of distribution center waste, it's clear that Apple still has a lot of room for improvement in reducing hazardous and landfilled waste.

What's mined is mine, and what's recycled isn't mined


One of the most environmentally detrimental processes in electronics production is mining. Consumer electronics are responsible for a significant amount of mining. The electronics industry is the second-largest consumer of copper. That's nothing to say of rare earth minerals, which are used for things like Taptic engines in smartphones.

Mining not only disrupts ecological sites by requiring deforestation and habitat destruction, but it also renders that land susceptible to erosion, which isn't easy to reverse. Ores and minerals are also capable of leaching into soil and groundwater. This can and often does contaminate the water table near mining sites and render drinking water unsafe.

Runoff and mine waste can also create ecological dead zones in streams, rivers, and ponds near mining sites. These minerals and ores often show up in food chains, the same way seafood has become associated with an increased risk of mercury poisoning.

Apple has done quite a bit to reduce the need for mined materials where possible. The new Mac mini and new MacBooks now use 100 percent recycled aluminum enclosures.

And while it wasn't included in this year's Environmental Responsibility Report, Apple recently went public with the fact that they're going to obtain rare earth elements from recycled electronics. The iPhone 11 line features recycled rare earth in the Taptic Engine, so the effort is underway.

This is a long-term goal for Apple, as stated in the environmental report.

"We're on a mission to one day use only recycled and renewable materials in our products and packaging, and to eventually eliminate our reliance on mining altogether" - Apple Environmental Responsibility Report 2019, page 23

While recycling and using recycled elements will never completely eliminate the damage done by manufacturing, it does help mitigate it. Recycling elements when and where they can, especially in the production of consumer elements, is a critical step in environmentally sustainable practices.

The only real solution to lessening environmental impact in a substantial way is for a company to stop producing products at unsustainable rates.

There isn't a glut of Apple products sitting on shelves, forever unused. Given that Tim Cook fixed Apple's supply and demand problem, leading him to be crowned the CEO, the company does an excellent job with on-demand device fabrication, and this keeps surplus and unused stock to a minimum. But the fact still remains that the company has produced billions of devices in its lifetime, and each one of those has an environmental impact.

The practical solution is for consumers to simply purchase phones and computers more infrequently, because reusing the same phone for multiple years greatly reduces environmental impact in a chain of events that leads to the manufacturing company making fewer. From a consumer standpoint, it can be hard to pass on the newest features, especially when carriers let you switch phones as frequently as every two years.