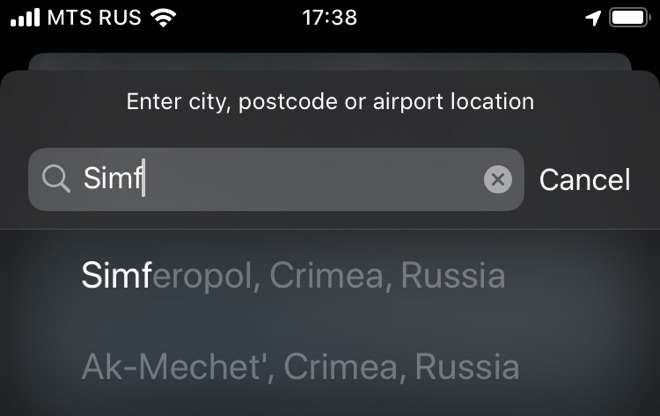 Crimea, which was annexed by the Russians in a not-so-covert land grab involving military units in 2014, shows up as Russian territory only when viewing Apple Maps and Weather in Russia. Elsewhere, the peninsula is not attributed to any one nation.

Moscow has for months urged Apple and other technology companies to recognize the region as Russian territory, noting that failure to do so runs counter to Russian law. It was this argument that ultimately swayed Apple's thinking on the matter, according to chairman of the Duma security and anti-corruption committee Vasily Piskaryov.

"There is no going back," Piskaryov said, as reported by the Interfax news agency. "Today, with Apple, the situation is closed - we have received everything we wanted."

"IPhones are great products. Seriously, though, @Apple, please, please, stick to high-tech and entertainment. Global politics is not your strong side. #CrimeaIsUkraine," the tweet reads.

Governments around the world decried Russia's aggressive move into Crimea. Political unrest in the region -- a situation many believe was fomented by Russia -- opened the door to an unofficial invasion on a sovereign nation that left thousands dead. Moscow denies the assertions, though it does admit "volunteers" assisted rebel forces in an ensuing separatist movement against Ukraine.

The U.S. and UK both leveled trade sanctions against Russian entities in 2014. As a result, Apple was forced to terminate developer agreements of coders living in Crimea.
«12345»