AppleInsider
Posted: September 4, 2018 4:38PM
in iPhone edited August 2020
Unsurprisingly, Apple does not plan to integrate fingerprint sensors under the screen of its 2019 iPhone, leaving the field open for Android adoption. 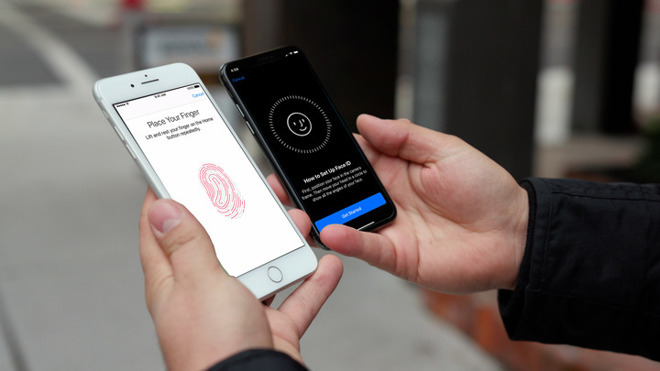 In a note seen by AppleInsider, Ming-Chi Kuo of TF International securities believes that Apple has left Touch ID behind for full-screen iPhones, at least in the near term. Reasons cited include little backlash from Face ID on the iPhone X, as well as higher than expected "user feedback" to the inclusion of fingerprint sensors under the screen of the Vivo X21.

Android manufacturers seem likely to jump on it as a differentiating factor, despite the middling response to it on the X21. Additionally, existing facial recognition systems on Android devices aren't as secure as Apple's implementation, and have been fooled by photographs.

Kuo expects that the Samsung Galaxy S10 in the spring of 2019 will adopt a fingerprint sensor embedded in the screen.

In 2017, Kuo expected yearly shipments of Android devices equipped with 3D sensing components to outnumber those with under-display optical recognition by two or three times over the next two to three years.

"3D sensing not only enables facial recognition in security applications and allows users to create fun expressions like Apple's Animoji, on a more important level, it is a key factor in the development of AR," Kuo wrote. "We therefore believe brand vendors are willing to spend more for related components."

This year, the analyst is expecting the fingerprint under display technology to grow 500 percent year-over-year through 2019, meaning to only about 15 million units in total, based on an estimate of 3 million X21 sales to date.

Wider adoption is expected with time, given maturation of the fingerprint sensing technology, and the relatively lower cost of implementation versus a secure depth-mapping facial recognition system.
«1234»