Hands on: Apple's iPhone XR brings color and value to the 2018 lineup

AppleInsider
Posted: October 26, 2018 10:51AM
in iPhone edited October 2018
Arriving just over a month after the iPhone XS and iPhone XS Max, the cheapest of Apple's three iPhone launches for 2018 has started to arrive with consumers. AppleInsider spends some time with the latest release to see how it measures up to its more expensive stablemates.

iPhone XR leaning on its box

What's in the box?

Existing iPhone owners will be unsurprised with the internals, as it's practically the same as last year's releases and for both the iPhone XS and iPhone XS Max. Aside from the iPhone XR itself, there is a 5W USB-A wall charger, headphones, and a Lightning to USB-A cable to supply power. 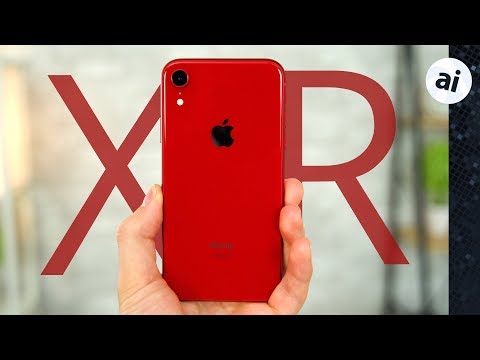 Just like the other 2018 releases, the iPhone XR is bundled with the standard issue white earbuds, which connects via the Lightning port. Apple has also dispensed with the Lightning to 3.5mm jack adapter, which means users will either need to acquire it separately to use their own headphones or shift over to Bluetooth, if they don't want to use the ones in the box.

The contents of the box accompanying the iPhone XR in the U.K.

Just from external appearances alone, switched off, the iPhone XR looks a lot like the iPhone XS, the iPhone XS Max, and the iPhone X from last year. There are relatively few external clues that it is a different device, and if the device is in a case, the casual observer will have no good way to distinguish it from the higher-end models at a glance from the front.

The yellow iPhone XR is striking

While the iPhone X and XS pair all have dual camera sensors and an oval camera bump, the iPhone XR opts for a single camera with a circular bump, which also shifts the flash below the camera when the iPhone is held in a portrait orientation. This is also different from the iPhone 8, which had its flash off to the side.

The size of the iPhone XR compared to the iPhone XS and iPhone X is noticeable, with it being slightly wider and taller, though certainly not to the extent of the iPhone XS Max. While it doesn't seem to be too big for one-handed usage, time will tell if the stretch to reach Command Center at the top right corner of the device will ultimately prove too discomforting.

The iPhone XR is bigger than the iPhone XS, but seemingly not too big for one-handed use

At the bottom, the iPhone XR shares the XS Max's six speaker hole pattern instead of using the iPhone XS' three-and-six pattern to fit in an extra antenna band. In fact, the lower edge doesn't even have an antenna band at all.

On the back is a glass panel, just like the others, enabling it to perform wireless charging. The metal band is also changed from stainless steel to aluminum, which probably affects the weight and the strength of the chassis a bit, but probably won't matter to most people.

Arguably the main change between the iPhone XR and the other two models is the screen. While the iPhone XS and iPhone XS Max use OLED panels, which offers fantastic contrast ratios among other benefits, Apple has instead opted for a "Liquid Retina HD" LCD IPS screen in the iPhone XR.

That's not to say that it's a bad display at all. At first glance, it appears to be bright, clear, and certainly adequate enough for most owners to use without complaint. It still offers the same True Tone and P3 wide color features albeit without a HDR display mode, but the use of LCD does introduce a few issues worth knowing about.

For a start, the resolution of 1,792 by 828 pixels is a lot lower than the Super Retina versions in the XS and Max. This also brings the pixel density down to 326 pixels per inch versus the 458ppi of the other two variants, which may seem disappointing at first, but it's the same density as the iPhone 8 display.

The screen is very much different, but at the same time familiar, at least to those who have used non-OLED iPhones in the past.

While the iPhone XR is the cheaper model of the current range, Apple hasn't reduced performance to go with the price. According to the specifications, it has practically the same internals as the XS and XS Max, aside from a reduction of RAM from 4 gigabytes to 3 gigabytes, which in theory means it should be in the same ballpark in terms of performance.

The benchmarks will have to wait for the full review, but an initial playing around with the features suggests it is just as quick. Even if the benchmarks show it to be a few percent slower, users are unlikely to see anything dramatic when navigating iOS.

The question here is probably not whether it is powerful, as it certainly is. In reality, it's how close the iPhone XR gets to the iPhone XS.

The front has the TrueDepth camera, which is used for Face ID as well as for self portraits, and is located in the screen's notch. On paper it seems to be identical to the version used by the XS and XS Max, and initial testing suggests there's no major immediate changes to worry about here.

The iPhone XR's single rear camera, and a pronounced bump

The more interesting area is around the back, with the aforementioned single camera. The iPhone XR loses the telephoto lens, but the remaining camera still uses a 12-megapixel sensor with an aperture of f/1.8, optical image stabilization, and 5x digital zoom.

Even though it can't display HDR images as well as its OLED-clad brethren, it still offers Smart HDR for photos, a quad-LED True Tone flash, most of the Portrait Lighting modes, and almost all of the video recording options.

The lack of a second telephoto camera doesn't stop it from being able to take portrait shots with the Depth Control to manage the bokeh.

Notably, while it offers the same Portrait Mode blur effect as the iPhone XS and iPhone XS Max, the iPhone XR is, for some reason, not able to be used on objects. A notice at the top of the screen advises "no person detected" when presented with a subject. This may be bad news for cat owners.

Portrait Mode is only for humans, apparently

Initial non-portrait photographs taken with it seem to be on par with the other two models, with a closer inspection arriving as part of its full review.

While the time with the iPhone XR has been brief so far, we strongly feel that customers acquiring the device will certainly be happy with what they receive, and with barely a chance of buyer's remorse.

AppleInsider will be making a closer examination of the iPhone XR and its features in the coming days and weeks, so keep reading for updates on our findings.

Deals on the iPhone XR