AppleInsider
Posted: February 21, 2020 6:02PM
in iOS
Apple has rolled out its "Look Around" feature of Apple Maps into three more cities in the United States, giving users the ability to see Boston, Philadelphia, and Washington, D.C. at street level on their iPhone or iPad. 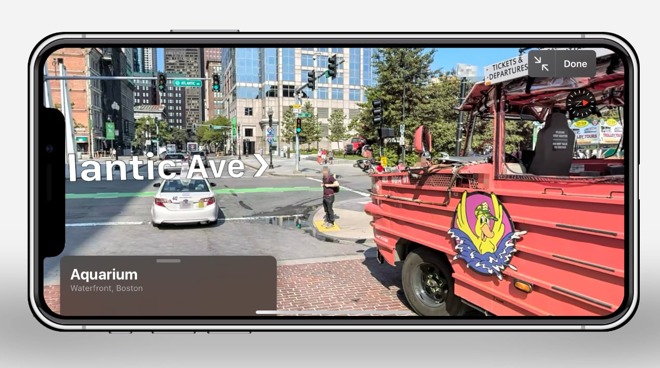 Enabled on Friday, the latest trio of cities in Look Around is now available to view from within the Apple Maps app in iOS and iPadOS. The rollout is happening relatively rapidly and should be available to all users globally by the end of the day.

The addition of Boston, Philadelphia, and Washington, D.C. to the roster, as spotted by MacRumors, follows earlier rollouts in Houston, Los Angeles, Las Vegas, New York City, San Francisco, and Oahu. Apple hasn't offered a timeline for future Look Around updates, but updates seem to arrive every few months.

The feature, Apple Maps' answer to Google Maps' Street View, can be accessed by going to one of the locations where Look Around is available. After tapping the binoculars icon, a specific street can be selected and previewed in a small window, which can be expanded to a full-screen view by tapping the preview.

Once inside Look Around, the feature works relatively similar to Street View, in that the view can be changed by swiping the display, while tapping part of the road in the distance will move the camera to that point. Unlike Street View, Apple's version is more animated in its transition between locations.

Look Around is part of a relaunch of Apple Maps, which now offers a generally improved experience to users, including Apple-collected data and high-resolution 3D imagery.
«12»