AppleInsider
Posted: May 27, 2018 3:45PM
in General Discussion edited May 2018
Out of the box, we were really impressed with the feel of OnePlus' most expensive device to date. The latest iteration is inexpensively priced compared to the iPhone X, starting at just $529, and comes with a pre-applied screen protector, a case, and a fast charger. 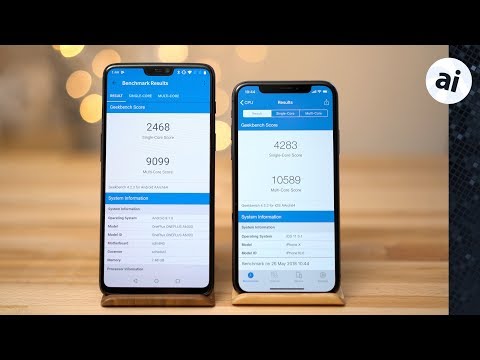 The OnePlus 6 used in our testing process is priced at $579, slightly higher than the base $529 base model. For that extra money, we get bumps in RAM from 6GB to 8GB, and flash storage from 64GB to 128GB. The iPhone X we are comparing it to is the base $999 model with 3GB of RAM and 64GB of storage.

For the price, the OnePlus 6 packs some serious value. The mid-tier OnePlus 6 sports the same high-end Qualcomm 845 processor that's included in the Galaxy S9 for almost $200 less. It's an eight-core CPU that consists of four efficiency cores and four performance cores, running at up-to 2.8Ghz. In comparison, the iPhone X has a six-core processor that contains four efficiency cores and two high-performance cores running up-to a slightly lower speed of 2.39Ghz.

In terms of graphics hardware, the iPhone X sports an Apple-designed three-core GPU, and the OnePlus uses an Adreno 630 GPU -- 30 percent faster than the previous model's 540.

Moving onto the AnTuTu benchmark, the OnePlus manages to beat out the iPhone X by almost 30%. AnTuTu's HTML 5 test crowned the iPhone X the winner, but not by much.

We also tested GFXBench's OpenGL Manhattan Offscreen test at 1080p to avoid resolution differences. Here we can see the iPhone X is a fair bit ahead.

In Octane 2.0, another browser benchmark, the iPhone X floors the OnePlus, likely thanks to Safari optimizations.

Looking at all of these benchmarks, the OnePlus 6 does an impressive job of keeping up with the iPhone X, even though it comes in at about half the price.In real-world use we were surprised by how smooth and responsive the One Plus 6 feels. In a lot of places it even feels quicker than the iPhone X. Part of that is faster animations, but we also noticed some apps launching noticeably faster.

We were also impressed with how fast its facial unlock feature works. It may not be as secure as Face ID, but it was quick enough that we typically didn't even see the lock screen before it was unlocked and ready.

With high-end CPU's and a boatload of RAM, the latest Android devices are no longer the slow glitchy devices that we've tested in the past. Of course, benchmark performance doesn't tell the whole story, so in the coming days we'll be doing more real-world comparisons between the OnePlus 6 and the iPhone X -- with part two discussing photo quality differences between the iPhone X and OnePlus 6.