AppleInsider
Posted: August 8, 2012 1:29PM
in iPhone edited January 2014
Google told reporters today that the future of web search looks identical to Apple's Siri, admitting, "if we are going to build the search of the future, we will have to solve difficult technology issues like speech recognition and natural language."

In a presentation to the media, Google noted that it current services 100 billion queries per month. However, it noted that the future of search will be based on context, not on queries.

To achieve that, Google will need to follow the lead of Apple's Siri, which was designed to figure out the question users were posing, rather than simply finding potential answers to property formed questions.

After Apple introduced Siri as a feature on the iPhone 4S last fall, observers began to realize that if Apple fields users' questions directly, it can replace Google as the middleman for all sorts of information that Google currently monetizes with paid search results.

Apple's Siri also integrates in particular with services like Yelp and Wolfram Alpha, which provide information on local businesses and general knowledge in ways that cut Google out of the picture entirely.

Google added voice-based question and answer services to Android 4.1, but the race to add new features to the Android platform is complicated by the fact that new versions have very slow adoption, in large part because Google's partners have little incentive to provide updates to their customers.

According to Google's own data from August 1, only 0.8% of Android users visiting its Google Play app market are on the latest Android 4.1 "Jelly Bean" release.

A full 80 percent of the active user base are suck with a version of Android 2.x, which came out 2010.

In contrast, Apple just noted that 80 percent of iOS users are running the latest iOS 5. Apple has also sold more Siri-capable iPhone 4S units than all of its previous generation of iPhone combined.

To get its own Siri-like features in front of users, Google will be releasing its Voice Search" feature for iOS as a third party app "within the next couple of days," noting that it submitted the app "a week or so" ago. 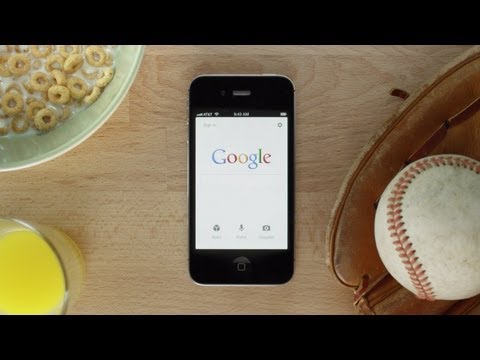 The app appears nearly identical in appearance to Siri (above), something that could trigger issues with Apple approving the title in the App Store.

Apple could also refuse to approve the app under its policy of blocking third party apps that substantial replace existing bundled apps, something the company says it does to avoid "user confusion."

Apple previously held up approval of Google Voice for over a year, and kept Google's Latitude friend finder app in limbo for two years as it considered the features. This left Google to rely upon web app alternatives to native titles in the App Store.
«123456789»